A Recumbent Bike Tried To Kill Me


I'm not sure what it is about when I decide I want to write and the universe conspiring to smack me with some sort of crisis, but here we are now into October, and I've been away for awhile because just barely into September, a recumbent bike tried to kill me.

Okay maybe not really, but it sure triggered a series of events that were, shall we say, a tad life altering. How did this happen? Pull up a chair and get a drink because do I have a story for you.

It had been a long and lazy summer where I had grand plans in the beginning, but I had underestimated the emotional work that would be required when planning my deceased husband's celebration, getting through what would have been our 25th wedding anniversary, selling some of his tools, and generally spending a lot of time alone in an empty house. I was really happy to be going back to work in September and looked at it as fresh starts and a new year.

Part of the fresh starts was returning to the gym and working out again, which I had put on hold when John became sick last September and I simply didn't have the time to do anymore. Working out really helps with my mental health as well as physical and I was really excited to get back at it. So excited, in fact, that I dove right back in. Oh, I had dialed the intensity back of course, but I knew that I was in fantastic shape when I quit so I should be able to get back fairly quickly. Right? Because in my mind I'm still 20, despite the fact that in reality I'm closer to 50.

I was on my second day of working out and had plans to walk on the treadmill, but the gym was busy and they were full so I settled for the recumbent bike. Normally I loathe recumbent bikes, but I wanted to stick to my working out commitment and planted myself in one, grumbling all the while.


After five minutes of peddling, even though I had it on a low setting and wasn't working particularly hard, I could already feel it in my legs. Recumbent bikes are tricky compared to a treadmill; you don't have instant feedback about how hard you are working.

"Oh lord. This is rough. But I have to do at least 30 minutes." I whipped out my phone to distract myself and kept going as the sweat poured off me. I didn't really feel short of breath, but my legs were screaming for mercy by the end. Workout two, done. Maybe a little more than usual, but give me a few days and it will be all good. I'll be stiff, yes-but that's no big deal.

The next 30 hours were pretty uneventful. I was all over achy and exhausted the next day, which seemed a little extreme for a workout but I chalked it up to overdoing things and resolved to rest up before I went back to the gym for another workout. There was a nap on the couch after work, I had a good long hot shower, and tucked myself into bed fairly early.

At around 2am, I was awakened from a deep sleep with a jolt-or rather, pain in my chest that burned, ached, and squeezed. The fire took my breath away and, clutching my chest, I stumbled to the bathroom to steady myself on the counter and collect my thoughts. The pain gnawed and crawled down my right arm, up my back, and crept up to the back of my throat. Nausea swept over me in waves as I clutched the handrail on the stairs and somehow got myself into the kitchen where I wavered for a few minutes before grabbing my coat, phone, purse, and car keys.

I have been asked many times how I knew I was having a heart attack, and then scolded and praised for what I did next. I have to tell you, there was no doubt in my mind that something was very, VERY WRONG and that I needed medical attention immediately. I've had first aid training repeatedly through the years, and know the signs of a heart attack. While at the time I knew what was happening, I also didn't really want to believe it was true. Even so, I don't recommend what I did next; get in my car and drive myself the 15 minutes to the hospital.

Since that night I've been scolded by everyone about how dumb this was, and now I agree, but at the time I was in fight or flight mode;getting to the hospital as fast as possible was the only thing in my brain. You also must remember that only a year before, John suddenly became septic and I had to call 911, then keep him awake and talking while we waited for the sirens to arrive. For months later, just the sounds from an ambulance would give me a panic attack so I knew that if I had to sit at my front door and wait 15 minutes for paramedics, I would surely have a panic attack and make things worse. Of course, crashing the car would also make things much worse but to be perfectly honest, I wasn't quite in my right mind.

Once in the hospital, things went fast. The pain in my chest had subsided, but my back and arm still hurt immensely and my asthma was acting up more than usual. I was hooked up to a bunch of machines and they took my blood, only to later explain that my results came back negative for troponin, but it's common for people to have a negative result initially and then for it to rise 4 hours later.

"Well, your troponin levels are elevated, and they barely meet the criteria but you might have had a heart attack."

To which I replied, "Isn't this like being pregnant? You either are or you aren't? How can you sort of have a heart attack?"

"Well, okay then. You did. Call friends or family, because we need to admit you." 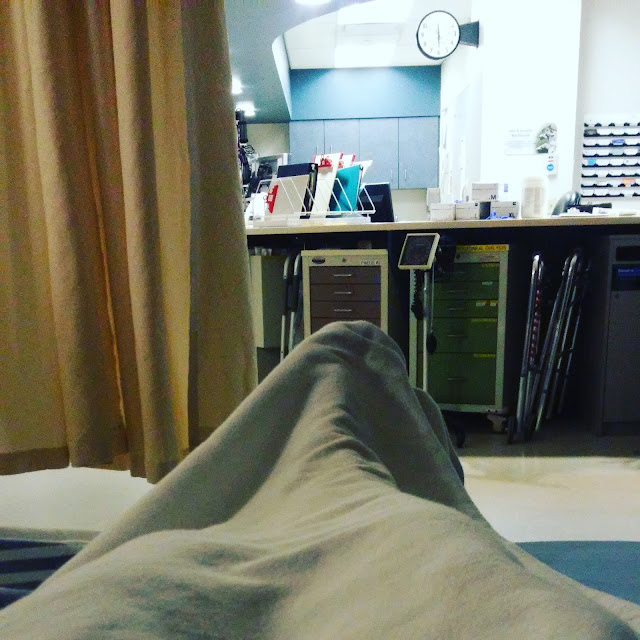